The concept of “Position University” is often thrown around during the NFL draft when a particular college has several players of the same position break into the league over a short span. However, I think a deeper look at the draft may reveal some other interesting things about what colleges may be able to truly make the claim they are “WR U” or “QB U” or whatever.

In this, the second iteration of Position U, we’ll be looking at Running Back. Since we’re only going back to 1990, “RB” is the easiest way to designate the players being discussed. This encompasses everyone who would be considered a “Halfback, “Tailback,” “Fullback,” or even “Scat Back,” the Canadian “Slotback,” or “power back.” In the 30 years since Dallas selected Emmitt Smith as the 17th overall pick in 1990, 781 men have heard their names called at the NFL draft to be a running back. 167 different institutions of higher learning have produced those backs and they’ve accumulated over a million rushing yards.

Only one RB has been selected 1st overall since ’90 and his story is a cautionary tale. Penn St standout Ki-Jana Carter dominated at the Collegiate level and put on a show at the Rose Bowl his Junior Year. Joe Pa, the Nittany Lions long-time coach, told Carter to go pro and he declared for the 1996 draft. The Cincinnati Bengals selected the bonafide can’t-miss star and he proceeded to suffer every injury known to man. Carter finished his career with 1,144 yards on 318 carries over seven years with several completely lost seasons in between. A travesty that both represents the constant suffering of the Bengals and the fickle nature of professional football.

Otherwise, the 1st round has been the most fertile ground for RB production. The 81 backs selected and 412,000+ yards are 10% and 36% of the total respectively. However, RBs are notoriously interchangeable. As a result, teams often grab backs with good measurables or from smaller schools in the later rounds. The most RB selections have occurred in the 7th, 4th, and 6th rounds despite a precipitous falloff in yardage and staying power after the 4th.

Breakdown by draft round

In order to bestow the title “RB U” we need to take a closer look at what schools these RBs are being drafted from. Of the 167 unique campuses, 27 of them have yielded at least 10 RBs since 1990. Most of the schools on the list would not surprise you and all of them come from a power-5 conference except Notre Dame. Only two schools have had 20 RBs selected, Ohio St and Alabama.

The Crimson Tide have been a powerhouse in NCAA Football for most of the time span of this study. However, relative to the school’s dominance, the RB production has been subpar. Mark Ingram, currently plying his trade in Baltimore, is the active leader and has a decent shot at catching Bama’s star alum Shaun Alexander. Drake and Henry have also shown some flashes that could change the perception of Bama backs but there’s plenty of busts in that group.

The Buckeyes have also had a strong showing the past few decades and claim 3 NCAA titles in the last 10 years. The total production, though, is equally as disappointing as their SEC counterparts in Tuscaloosa. Amazingly, of the 20 RBs both schools have produced, they’ve accumulated exactly 70 years of seasons with at least one rushing or receiving yard each, and are within 800 rushing yards of each other’s totals. The Buckeyes have a slight advantage on the ground while the Tide have around 3000 more yards through the air. OSU does have Eddie George. The 10,000-yard man was the ’96 offensive Rookie-of-the-Year and went to 4-straight Pro Bowls. Active backs Carlos Hyde and Ezekiel Elliott are also strong representatives of the Horseshoe in today’s NFL.

So, while there’s plenty of quantity from those two schools, the quality is lacking. Accumulated years is another good metric for determining RB U and two other schools stand above the others. The only universities that have stacked up 100+ years of RB production over the past 30 years are Florida St and Penn St.

Warrick Dunn is the headliner for FlaSt, logging 10,000+ yards on the ground and a Super Bowl with Tampa. Fullback Zack Crockett’s 14 years with at least a rushing or receiving yard have him tied for 4th among RBs in this span along with Darren Sproles, Brian Mitchell, and Larry Centers behind Frank Gore (and counting) and Emmitt Smith (15), Lorenzo Neal (16), and Fred McAfee (17). Excluding the recent picks and busts Sean Jackson and Lamarr Glenn, every Seminole runner has survived at least 4 years. Pretty impressive.

We’ve talked about the tragedy of Ki-Jana Carter. Despite his struggles, he did hang around for a while and contributed to the Nittany Lions’ 103 aggregate years of RB production. Joe Paterno’s tough-nosed brand of football produced a number of NFL-calibre Fullbacks with staying power including 12-year men Sam Gash and Richie Anderson. It’ll be interesting to see if Saquon Barkley can catch fellow alumni Gary Brown and Larry Johnson.

The final way to try and sort out who has the best claim on RB U is to look at the actual yardage gained. Three schools have accrued over 40,000 yards on the ground and two have 16000+ through the air. The rushing leaders are Miami (FL), Georgia, and Tennessee. The receiving leaders are Miami (FL) and Florida St. The ‘Noles 19,836 receiving yards are tops in that category. Miami (FL) is actually only 721 yards short of 60,000 rushing yards while the other two are just barely over 40,000. So is Miami RB U?

Some incredible running backs have come out of “The U.” Edgerrin James, Clinton Portis, Willis McGahee, and Frank Gore are all historically significant backs. Of the RBs with 10,000+ rushing yards since ’90, Miami is one of five schools with 2 along with Florida (Emmitt Smith, Fred Taylor), Notre Dame (Ricky Watters, Jerome Bettis), Pittsburgh (Curtis Martin, LeSean McCoy), and Virginia (Tiki Barber, Thomas Jones). Including McGahee, Portis, and pre-1990 star Ottis Anderson the ‘Canes are the only school with 5 backs who rushed for over 8,000 yards. 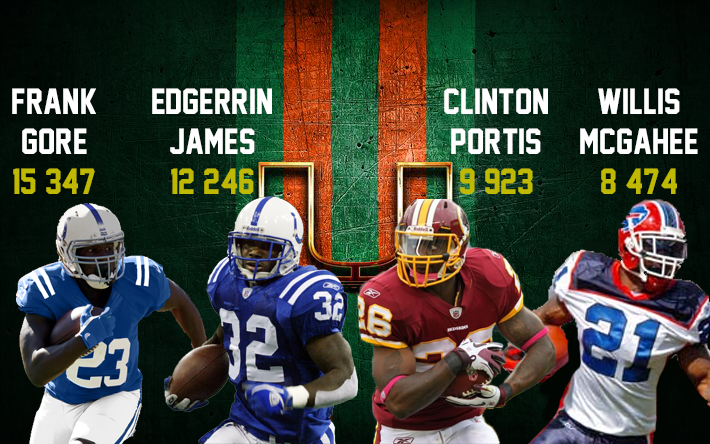 I waffled a bit on naming QB U because multiple schools had a decent claim but RB U is much clearer. The Miami Hurricanes have a virtually unmatched combination of production, staying power, and star power. I’ll leave you with highlights of my personal favorite Miami back, Mr. Willis McGahee.

Let us know what you think in the comments!